Sometimes I think the garden is the coolest in the fall, despite that (or probably because) it becomes desperate and unseemly in its last ditch efforts to survive and reproduce.  The tomato plants have lost most of their leaves, and those that are left are lacy, yellow, and barely hanging on. But there are still a ton of tomatoes, and I think if anything there are more this time of year, although fewer of them end up being edible. Huge clusters of tomatoes at the end of completely dead branches are a tomato mom’s ultimately self-sacrifice for the sake of her children. 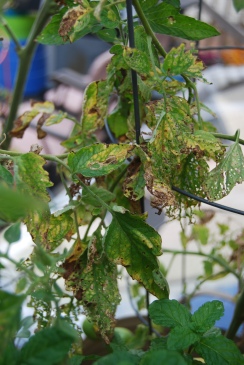 This crazy strawberry plant is still giving me a few strawberries here and there – in November! They weren’t kidding about everbearing.  But looking closer, I noticed it was also starting to produce some great-looking cherry tomatoes. Now that’s a fancy strawberry plant!  (Some seeds from dropped tomatoes must have fallen into the strawberry pot, and it’s grown quite a robust tomato plant of its own.)

The purple peppers are also still producing more peppers than I can eat…actually, I’ve pretty much given up on eating these, since they’re not very tasty.  The squirrels can have them.

Speaking of squirrels, I’m just starting to have issues with them. The zucchini harvest was abysmal this year, but I found one last fall zucchini. Unfortunately a squirrel also found it and took a little squirrel bite.  Guess he didn’t like it though…

Autumn wins you best by this its mute appeal to sympathy for its decay.
~Robert Browning